The bridge of death 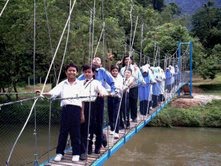 This picture of the suspension bridge across the Kampar River at the Kuala Dipang Curriculum centre, Kampar, Perak was taken on October 12, 2009 at 11.42 am. Who could have predicted that the bridge would collapse 15 days later as the picture below shows?

On Monday night (October 26, 2009) the bridge, which was opened a month ago, gave way. The 22 pupils on the overpass were plunged into the river. Nineteen were rescued from the river while three girls drowned.

They were among nearly 300 pupils attending a 1Malaysia unity camp. Another tragedy, another round of gloomy introspection.

Will we ever learn from our past disasters?

The usual calls for investigation have kept the newspapers busy. What's the use of making noises about safety and security? You and I know that we don't take these things seriously.

I am reminded of an observation made by the late Syed Hussein Alatas: "Malaysia has no awareness of standards." This latest catastrophe is a further proof of the validity of his statement.