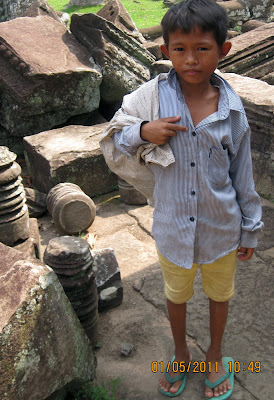 "If you only see two temples, Angkor Wat and Bayon should be the ones." That is the advice from this website and my friends and I did just that on the final day of our recent stay in Siem Reap, Cambodia. In addition, we visited the Ta Prohm temple.

Half a day is hardly enough to cover the numerous religious structures in the Angkor Archaeological Park, which is close to Siem Reap city.

Khmer domination over the Angkor Kingdom lasted about 600 years beginning from the 9th Century and during this period several hundred temples were built. Our guide told us that some 300 have been listed and restored.

I enjoyed the visit to the "palaces of gods" so much that I plan to visit Siem Reap again; this time to explore the ruins thoroughly.

Michael Freeman and Claude Jacques (Ancient Angkor, 2003) write: "To gain a proper understanding of what a Khmer temple was, it should first be recalled that it was not a meeting place of the faithful but the palace of a god, who was enshrined there to allow him to bestow his beneficence, in particular on the founder and his familiars.

"There was thus the need to build the finest possible residence for him, to be sure, although as he was there in the form of a statue there was little need for a large space.

"One of the largest is the central shrine of Angkor Wat and its cella has internal dimensions of 4.6 metres by 4.7; the pedestal of the statue being approximately the width of the door, would have been 1.6 metres square. So a great temple would not be a vast palace for a single god but a grouping of multiple shrines with a main divinity at the centre."

Below are some pictures of my brief tour of the religious monuments at the Angkor Archaeological Park, which is a World Heritage Site. 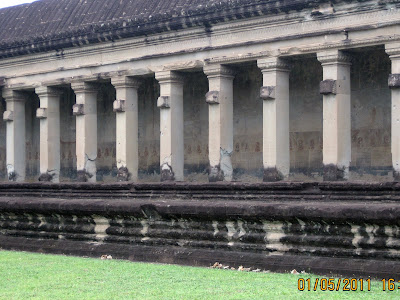 Love this corridor of one of the structures of Angkor Wat. It was exciting to walk the corridors of this famous symbol of Cambodian nation. Some two million visitors are likely to visit this legendary ruins by the end of this year. 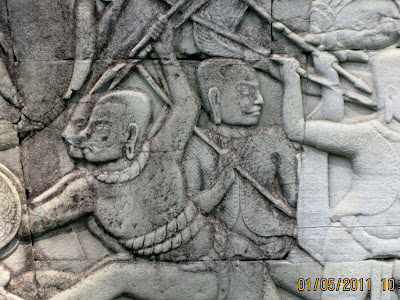 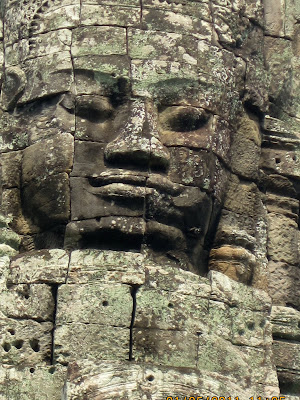 You will encounter bas-reliefs such as the type seen in the second picture on the exterior walls of the lower level of the Bayon while the stone faces -- the third picture serves as an example -- sit on the upper level. 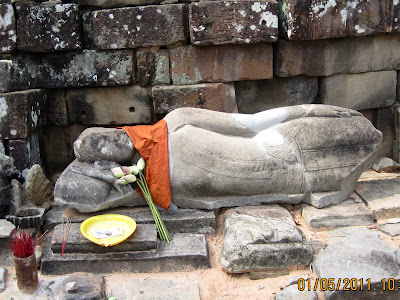 Visitors will appreciate this quaint relic of the past, also found at the Bayon. The two photos below were taken at the Ta Prohm, where "massive fig and silk-cotton trees grow from the towers and corridors". 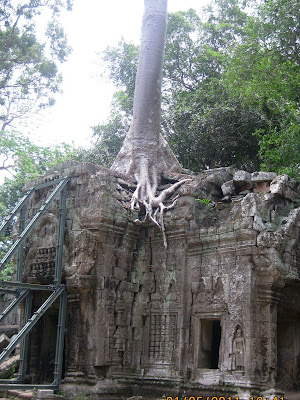 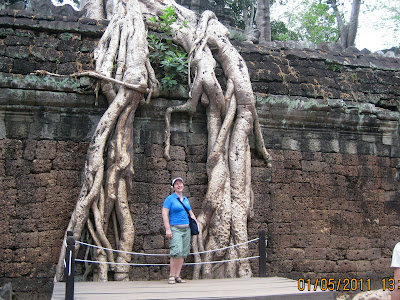