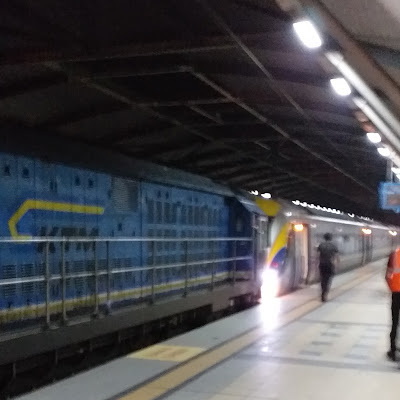 The locomotive joins the failed train

A routine trip to Kuala Lumpur Hospital for a medical check up turned out to be a nightmare for Rabiaa Dani and her husband.

Their ticket was for a day train ride to KL Sentral, leaving Ipoh railway station at 8.20am, and returning to Ipoh at night. The couple arrived safely at KL Sentral Station and proceeded to the hospital immediately.

Everything went well at the hospital. They even managed to sneak a shopping trip to KLCC for a quick look see before returning to KL Sentral for their 7.40pm train back to Ipoh.

The train (9032), like clockwork, departed at the scheduled time. Both Rabiaa and her husband fell asleep about ten minutes after the train had left KL Sentral station. They woke up shortly before hearing the sound of a heavy object hitting something; the train came to a halt soon after.


Their nighmare had begun.

Rabiaa and her husband later learned that the train had hit a pig which was crossing the track at kilometre 259.00. The impact had damaged the twin tower air dryer pipe and train Captain declared failure at 21.57pm.

KTM (Keretapi Tanah Melayu or Malayan Railway) had arranged for Loko 29101 ex 155 to pull the stranded train to Sungkai's Platform 1 where all passengers would disembark. Another train, Set E203, from Batu Gajah would be on standby to pick up the helpless passengers and advance to Ipoh, the final destination for Train 9032.

It was a long wait for the locomotive, reaching Sungkai before 12.30am. The replacement train left Sungkai station at 12.34am. Thankfully, passengers could take a toilet break at Sungkai station. It was not possible to use the toilets on the failed train as stewardesses on duty had locked them as soon as they discerned the failure.

Passengers arrived at Ipoh station before 1.30am. Phew! It's time for a well deserved teh tarik and an opportunity to review what had just happened.

On the whole, passengers were well behaved with a few demanding for a proper explanation from the stewardesses who tried their best to accommodate their requests.

Rabiaa and her husband are not likely to forget the nasty incident but it has not lessen their love for trains and train rides. Their next trip to Kuala Lumpur is in December.