The genius of Shunya Susuki 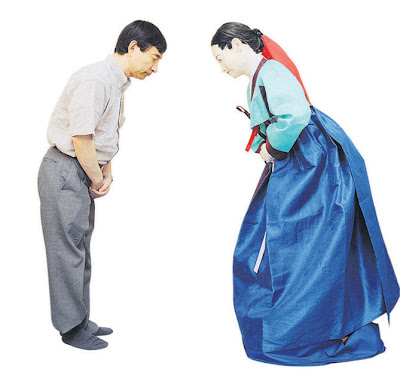 His wide-ranging creations which include solar electric cars, kites of unusual designs, sculpture of women and computer graphics animation reveal a highly-inventive mind.

The robot will bow with a smile when it meets a person.

Susuki's creative endeavours display a commitment of time, energy and resources which is very
encouraging to those who wish to hone their artistic skills.

Some would call him a creative genius and I think that description is apt.

But can anyone be a genius?

Yes, if we accept Edward Said's explanation of what makes a genius.

"The essential thing about the actual works of genius is that they hide or eliminate all the traces
of the labour that went into them.

"Rather than trying to retrace the massive effort that went into the work's making, we ascribe
everything to 'genius', as if genius was a magic wand, or a secret chemical formula.

"This rather lazy idea of genius as something both final and beyond normal comprehension
sentimentalises, obscures, venerates what it should instead be studying with profit to everyone:
namely, the fact that genius is more a remarkable devotion to work, to patience, to slogging away
at a problem or a task than it is simply a matter of having a devastating flash of divine inspiration.

"There's no way of doing without the inspiration, of course.

"But that's less important than what the genius makes of it, through exhaustive work and an
obsessive attention to detail, going on for years and years.

"Patience is as important a virtue as ingenuity, perhaps even more so.

"Every genius works hard, though not everyone who perspires is a genius. The qualities that a
genius has include a certain incomparable elegance and inevitability: these take one's breath
away immediately."

Edward Said, the late Palestinian intellectual, may well be describing Susuki, who believes that
an individual is blessed with his or her own talent.

It is a matter of discovering what it is and taking it as far as you want to go.

The choice is yours.

NOTE: Read "Creative Genius" for more on Shunya Susuki.
Photo of Shunya Susuki and his Jang Geum Robot was taken by Maki Inoue
from The Nishinippon Newspaper.