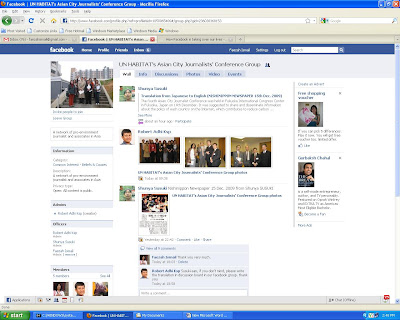 The Asian City Journalist Conference (ACJC) is on Facebook.

It is a platform for environmentally conscious journalists and associates in Asia to hook up and communicate with like-minded individuals.

Present at the dinner were journalists from Japan, Vietnam, the Philippines, Thailand, Indonesia and Malaysia.

The conversation over dinner mainly centred on establishing a space for journalists and associates connected with ACJC to create an online presence and to act as an alumni association.

That was when Susuki – who participated in ACJC as coordinating officer for UN Habitat Regional Office for Asia and the Pacific (Fukuoka) prior to his transfer to Fukuoka City Hall in April this year – came up with the Facebook plan.

December 31, 2014
Dec 31, 2014, the last day of the year and the end of my one year stint at The Rakyat Post , an online news portal.
Educational is the best way to sum up my year at The Rakyat Post.
Leaving your comfort zone is intimidating at first; it has a steep learning curve. But now I wish I had done it sooner and the whole exercise reaffirms my motto: “learn, learn, learn”.
Einstein was spot on when he said, “Learning is not a product of schooling but the lifelong attempt to acquire it”.
When I left theNew Straits Times to join The Rakyat Post on Jan 3, 2014, I didn’t know what to expect.
Nelson Fernandez, also known was Mohd Ridzwan Abdullah, had invited me to join him at the website this time last year.

He was charged with assembling a team to provide content for the portal. And I am glad I said yes.
Switching from traditional journalism to online journalism is challenging, as anyone who had made that transition will tell you.
Editorial content is disseminated by way of the internet as opposed to pub…
2 comments
Read more

December 31, 2009
People are always waiting for something.

September 30, 2010
People who do not use Facebook fall into three broad categories.

The first group is completely indifferent to it, the second finds it mildly irritating and the third dislikes it intensely.

I made the mistake of asking Shamsul, who is director of the Institute of Ethnic Studies at Universiti Kebangsaan Malaysia, if he was on Facebook, the social network which was hatched up in the dormitories of Harvard six years ago.

"I have a face and I keep thousands of books. Why do I need Facebook?"

How do you react to that reply?

I didn't. I meekly invited him to elaborate on his reasons.

"Facebook will take away my soul and I won't allow that to happen because I am a believer," says Shamsul fiercely, who launched into a tirade of accusations against Facebook.

Ninety per cent of the things you read on Facebook are either petty, bitter, rude or offensive.