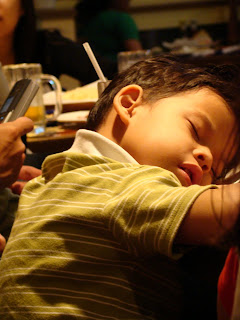 People are always waiting for something.

But what happens when the "waited" doesn't appear?

Does your desire for it become habitual?

And does that longing develop into optimism that soon it "would turn up at any given moment"?

Sillada describes "this intangible form of waiting, which is beyond the empirical certainty of the two elements (the waited and the appointed time), as the metaphysical aspect of waiting".

All of us have experienced this type of waiting.

"Even if the chance of the waited to come were nil, something ineffable and magical could happen to the waiter, because the metaphysical aspect of waiting" has the power "to motivate the waiter to do something worthwhile within the process of waiting".

That is the most important point of Sillada's message.

As the following view puts it:

"Patience is waiting. Not passively waiting. That is laziness. But to keep going when the going is hard and slow -- that is patience." (Source unknown)

My conservations with thoughtful people reveal the same central idea: patience is absolutely necessary when we embark on anything significant.

It could be looking for a new job, searching for the next break or writing a book.

Don't expect overnight success, however we define it.

And the period of "restlessness" that comes with the journey is a given.

But that "gives us wisdom to dissect and rationalise the purpose and meaning of our existence", writes Sillada.

"The tension between despair and anxiety, boredom and activity, joy and sorrow as well as victory and defeat": that is part and parcel of the long wait.

I draw comfort from the words of Rumi, the 13th century Persian poet, jurist, theologian and sufi mystic.

"Don't grieve. Anything you lose comes round in another form."

Anonymous said…
A lovely post.
I always encourage people to have faith in themselves.
No matter what they are waiting for, always believe that there is a right timing for everything, and nothing can defeat an optimist.
If what you want hasn't happened yet, make the best of what has happened first.
Waiting ultimately means being prepared for what is to come.
And opportunity always rewards those who are prepared.

Anonymous said…
Wish everyone a happy new year and all the very best for 2010!

soo said…
Waiting is part of a process that is perfected over time. We learn to wait for little things when we are young, and as life gets more complicated, the waiting period gets longer. The beautiful part of waiting is hope. A hope for the desires of the heart to be fulfilled. - KSL
3 January 2010 at 01:28

Faezah Ismail said…
That is soo true, Soo Ling. I know you understand the concept of waiting (and hope)very well.
3 January 2010 at 08:47