Guest Post: May your kids treat you the same

March 26, 2010
The sight of a poor abandoned dog she calls Scruffy gets guest blogger JEHAN MOHD all worked up and wishing divine justice for his heartless owners. Here is her plea. 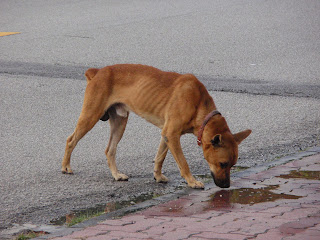 Scruffy trying to hydrate himself from a small
puddle of water outside Jehan Mohd's house.

FOR the past several weeks, whenever a car pulls up in front of my terraced house or that of the opposite neighbour's, a scruffy lanky brown dog would come running out of nowhere to greet the occupants — whether he’s welcome to do so or not.

More a nuisance than a delight to the residents here, the mongrel seems to have taken a liking to our little area — never mind the fact that he’s often shooed away — and he guards his territory like the loyal pet he used to be.

His collar — once a proud symbol of belonging — is now a sad reminder of how easily pets like him can be discarded.

While I'm very upset that he runs loose outside and tries to enter our compounds once in a while, the real culprits in this situation are his former owners.

His ribs are visible through his malnourished skin, he drinks whatever water he can get from puddles on the road and fights the neighbourhood strays for whatever scraps of food good Samaritans give him.

On an almost daily basis, there would be fierce snarling and gnashing of teeth as he fights for survival.

Sometimes, he would be defeated by the strays used to the hard life. A few days ago he was cowering under a car while an old white and brown homeless dog was trying to get at him to tear him apart.

Luckily, a couple of humans shooed the bigger dog away and Scruffy (as he looks like he might be called that) could come out from under the car.

Unluckily, he still remains on the streets fending for himself.

Is this your dog?

Because, if it is, you should be ashamed of what you have done to him and punished for how you have abandoned him just because he’s old/no longer cute/a burden/too expensive to care for.

May your kids and their kids treat you the same.

Just because they’re cute when young and they can’t ever articulate themselves in human-speak doesn't mean animals have no feelings when they are discarded in their later years.

Unknown said…
what an interesting way describing a stray.. it sounds almost like a neglected senior citizen which isnt uncommon these days. But yes! pet owners have to be more responsible than this.
27 March 2010 at 20:07

Unknown said…
This is a very nice little review.I have few experiences with my dogs and i learned that the more they get old,the more they get scared and need the owner.
"Sometimes.some men are worse than the beast." - the animal lovers of Switzerland.
7 September 2010 at 03:40