January 29, 2010
Guest blogger Jehan Mohd writes about what she thinks about the promotional stunts for the late King of Pop's DVD release of the concert that never was. 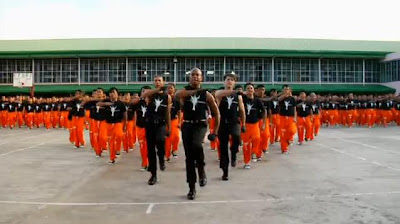 Screenshot from Dancing Inmates - Michael Jackson's This Is It
GETTING a bunch of convicts serving time at a maximum security facility to promote the launch of your latest DVD may not seem to be the brightest of ideas…unless you’re a recently deceased-cum-former-King-of-Pop and the prisoners are those at Cebu Provincial Detention and Rehabilitation Center, a maximum security prison in the Philippines.

The inmates who made waves globally in 2007 when a video of them dancing to Michael Jackson’s Thriller hit YouTube aren’t exactly unknown (collectively, anyway) – videos of them dancing to other songs have received tens of millions of hits in total.

Nevertheless being visited by longtime MJ choreographer Travis Payne and dancers Daniel Celebre and Dres Reid who taught the inmates the moves to a sequence from MJ’s This Is It, and performed a dance to promote the launch of the DVD must still be pretty exciting.

It’s hard not to admire and get excited by the efforts of these 1,500-odd men.

You might even forget that these are hardened criminals and not a bunch of kids getting together for a flash mob type event (yes, I am spoiling the video for you) – at the end of the video, they form a giant peace sign.

The choice of They Don’t Care about Us as the song they dance to is kind of ironic (or fitting, depending on how you see it) as one of the original music videos (two were made for this song) saw Michael Jackson singing and dancing with inmates in a prison facility.

Who, aside from their families and loved ones, would look upon prisoners kindly or with admiration? These are people who committed not just any petty crime but serious offences – including murder, rape and drug trafficking – that landed them in the maximum security facility.

In his site, he says that rehabilitation has to be “anchored on bringing out the best in men instead of the worst…” and that it should be done with compassion so that a sinner can be separated from the sin.

I can imagine that the people who fell victim to their acts not being fans of these criminals.

Still, for the four to five-minute duration of the songs they dance to, normal viewers and total strangers to them would still be amazed at how “hard-core” criminals can let their guards down enough to give in to dance.