The other face of Gaza

January 15, 2010
Guest blogger Jehan Mohd speaks to Perdana Global Peace Organisation manager Ram Karthigasu about the adventures he had on the Viva Palestina convoy, which recently successfully delivered humanitarian aid to the Palestinians in the besieged territory of Gaza. 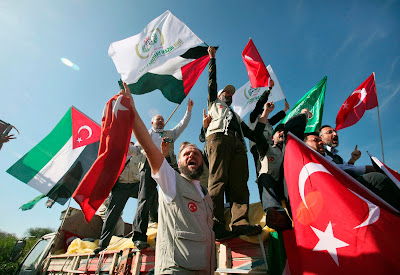 International peace activists shout as they stand atop a truck carrying medical supplies in Gaza City January 7, 2010. Egypt has reached a deal with members of an aid convoy to take supplies to Palestinians in Gaza after protests overnight, but Cairo barred their private cars from crossing, an Egyptian security source said. REUTERS/Suhaib Salem
They hang out in cyber-cafes to play popular video game Counter-Strike, are in touch with the latest news through the Internet and complete their attire with mobile phones.


If not for the seemingly requisite AK-47 slung over their shoulder, these young Gazan boys may have passed off for normal teenagers in any other country.
“Everybody carries a gun – all smuggled in – in Gaza — it’s like a normal thing there,” says Perdana Global Peace Organisation manager Ram Karthigasu, who recently visited the war-torn territory as part of the Viva Palestina convoy to deliver much needed humanitarian aid.
Years of being under siege and constant bombardment may have toughened the youths – most of whom aspire to become doctors or civil engineers – but they remain optimistic about their lives.
“Most of the kids I spoke to seemed very optimistic – they are like ‘yeah, we’re going to get out there and kill some Israelis and Egyptians, finish our PhDs, come back and shoot more Israelis and Egyptians’,” says Ram, half-jokingly. 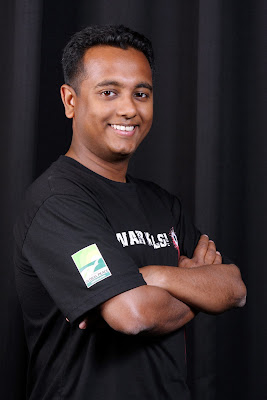 Hundreds who have been offered full scholarships to study at Oxbridge or Ivy League universities are unable to do so because they cannot pass the borders.
He says being able to enter the territory has given the volunteers a better idea of what is actually needed.
“We realise that things like milk powder is something they are able to acquire by smuggling them through underground tunnels.
“Maybe we should now look at how we can help these students get out to pursue their studies,” says Ram.
A few of the youths he met don’t go to school because they’ve already completed secondary school but aren’t able to continue their studies – but they learn to make do.
“I met this 15-year-old who’s a computer hacker.
“He demonstrated how he could find out the password to my Gmail account on my laptop,” he says.
No stranger to the Palestinian conflict – it was a major subject in his Master’s of International Relations course at the University of East Anglia, Norwich, UK – he still found the trip an eye-opener as he saw life as it was, something that you can’t get by merely reading a book.
Driving through Gaza city is akin to driving through an old Malaysian town – “only really clean”, he says.
“It’s so embarrassing for Egypt, which is a shithole because it’s so badly run and whatnot.
“If there were no pyramids , there’s no reason to go to Egypt,” he says. 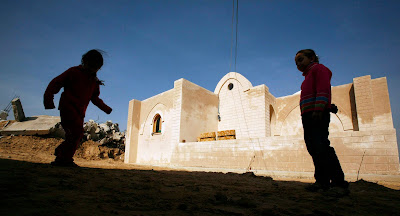 Members of the Al-Athamna family play outside their clay house in the northern Gaza Strip January 11, 2010. Palestinians in Gaza suspect that temporary clay houses they are being given to replace homes destroyed a year ago in the Israeli offensive are a sign that the United Nations is giving up on reconstruction.  REUTERS/Suhaib Salem
His bitterness with Egypt is no surprise – the nation had seemed bent on preventing the convoy from reaching the war-torn territory by putting laying down several tedious conditions for their entry.


Many a time the plight of the Palestinians in Gaza tend to be “hijacked” to be an issue on Muslim brotherhood.


During the convoy, Ram was approached by “friendly and curious” youths, also volunteers on the convoy, who tried to convert him to Islam, not being able to fathom what he – a non-white Hindu – was doing there.


“What is happening there is a humanitarian issue - it’s about the right to live.”


While the Islamist political party Hamas may be painted as a demon by western media, people on the street in Gaza do seem to respect them – regardless of whether they are Muslims or Christians.


“They’re militant and aggressive but they’re not corrupt…after years of Fatah’s failure as a governing body, Hamas was a breath of fresh air.”


Also, unlike Malaysia, religion does not seem to be used as a platform for governing the territory.


“Without the bombings and sanctions, they would probably be a secular Muslim state akin to Turkey,” says Ram.


“So when the Israelis and Americans say that the Palestinians are Muslim terrorists, it’s way off the mark because they’re not and you can see this when you go there.”
---

Read this Sunday's Learning Curve and next Saturday's YOU for more reports.