Breaking the fast with orphans 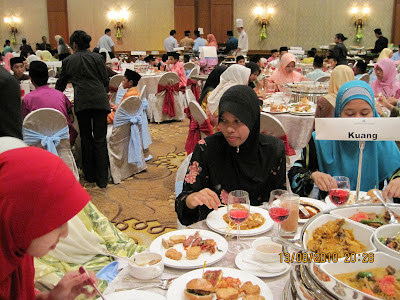 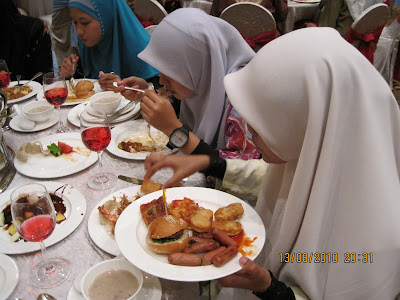 Some 300 orphans from five welfare homes and orphanages in the Klang Valley (pictures) were treated to berbuka puasa (the meal which breaks the day's fast, also known as iftar in some cultures) at Nikko Hotel, Kuala Lumpur yesterday.

Members of the media were also invited to the event, which was organised by Permodalan Nasional Berhad (PNB), Malaysia's biggest fund management company. It is a yearly occurrence.

The special guests received duit raya (the customary cash gift for Eid ul-Fitr, the first day of Shawal that marks the end of Ramadan), dates and cookies for Eid ul-Fitr.

PNB is among many corporations in Malaysia that organise berbuka puasa for the underprivileged sections of the community in Malaysia.

While I laud the move by these corporations, I could not help but wonder why hotels are chosen as the venues for these social functions?

What is wrong with community halls, mosques or school halls?

Other members of the community -- rich, poor, thinkers and construction workers -- and not just officials from the corporations should be part of the guest list.

The idea is to get to know the orphans and to reflect on their situation. Do they eat properly, go to school and get access to medical care?

Close your eyes and imagine that you are an orphan without the support of a loving family!


The Prophet (PBUH) described Ramadan as "the month of mercy".


He said: "I am the person who looks after an orphan and provides for him, will be in Paradise like this," putting his index and middle fingers together. (Al-Bukhari).

Hotels are anything but cheap.


What is the message that organisers are trying to get across to the orphans? That mee rebus (noodles with thick gravy) costs RM 28 a plate at the coffee house of a luxury hotel? That taking your meals at a hotel is something to aspire to? That five-star hotels are the only places for celebration?

Don't get me wrong. I am not against the occasional dinner treat at a hotel but I do not condone teaching extravagance and wastage to Malaysian youngsters.

justmytwocents said…
I completely agree with you. If you really genuinely care about these unfortunate children, why choose to show it yearly in the form of lavish, unnecessary extravagance? What about regularly visiting them, checking on their needs. Do they have enough books and stationery? Do they get good medical care when they are sick or have to make do with what those orphans can provide? What about their non-material needs like care, affection and occasional pat on the back or rub on the head? This whole Ramadan 'charity' really needs to be revised to prevent more and more organisations getting it wrong when planning such event especially in this holy month of Ramadan.
15 August 2010 at 11:10

FAEZAH ISMAIL said…
Thank you so much. As a society we must do more for the underprivileged. The question is, do we want to?
15 August 2010 at 12:01