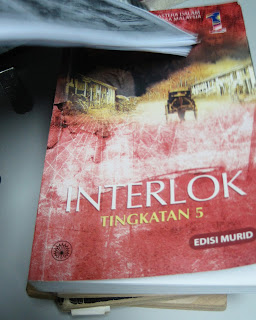 The independent panel set up to examine with a view to removing parts of Datuk Abdullah Hussain's novel Interlok described as sensitive by the Indian community met for the first time on Wednesday.

Panel chairman Distinguished Professor Datuk Shamsul Amri Baharuddin said after the meeting that "no time limit has been given but we want to complete it fast".

Yes, please do that panel members. You have to think of the poor fifth-formers who have to spend time learning about the literature component of the subject Bahasa Malaysia.

My nephew is one of them. He is understandably confused about the whole thing and is annoyed that the dispute has dragged on for nearly three months. Fifth formers have to take an examination -- the Sijil Pelajaran Malaysia -- later this year.

It is understood that students in some schools in Kuala Lumpur, Putrajaya, Selangor and Negeri Sembilan (these are the schools which are using the student's edition of the novel: see photo) have started studying the text but teachers are tactfully skirting around the sensitive bits.

Panel's findings 'out in a month'

Amended 'Interlok' to be reprinted