Ties that do not bind

February 12, 2011
Former ambassador to Malaysia John R. Malott's piece on the One Malaysia concept and its attendant problems (The Wall Street Journal, February 8, 2011) did not shed anything new on the subject.

He merely regurgitated information acquired from here and there. For those who wanted new insights into the state and study of ethnic relations in Malaysia, Malott's article was disappointing.

The recent Interlok controversy prompted me to ask Distinguished Professor Datuk Shamsul Amri Baharuddin, founding director of the Institute of Ethnic Studies at Universiti Kebangsaan Malaysia, to explain the recurring ethnic tensions in Malaysia, a point which Malott elaborated with relish.

See the article (Learning Curve, New Sunday Times, February 13, 2010) below for his views on the subject.

The tourism industry has managed to flaunt Malaysia's diverse cultural life. But this diversity has never been really captured research-wise, writes FAEZAH ISMAIL 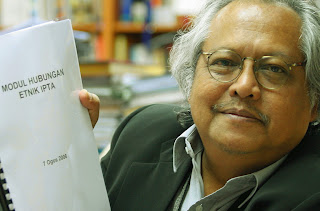 The last bibliography on ethnic relations in Malaysia was published in 1992.The compiler was Tan Chee-Beng and the title, appropriately enough, is the Bibliography on Ethnic Relations with Special Reference to Malaysia and Singapore.

Regrettably, an updated version has yet to appear. “Bibliographies tell a lot about the state of a discipline at a point in time. Can you imagine the level of our knowledge about ethnic relations in this country?” asks Distinguished Professor Datuk Shamsul Amri Baharuddin (picture), who is the founding director of the Institute of Ethnic Studies (or KITA) at Universiti Kebangsaan Malaysia.

Malaysia’s inability to bring up to date an important text such as this one suggests “a deep-rooted knowledge problem”, says Shamsul, who is also the chief editor of the ethnic relations module. And a thorough knowledge of Malaysia’s ethnic diversity is sorely needed to deal with tensions that occur every now and again, he adds.

The failure to update the 1992 ethnic relations bibliography and the frictions that arise as a result of differences in a plural society — the Interlok dispute and the hair-trimming incident involving a Sikh teenager being the most recent — are a sad commentary not only on the state but also the study of ethnic relations in Malaysia.

The clashes “will continue because we do not seriously prepare ourselves to deal with them”, says Shamsul. “When a conflict emerges we make a lot of noise hoping that it will go away but it will persist unless we choose a mature approach to ethnic tensions.”

The quarrel about the move to adopt Datuk Abdullah Hussain’s novel Interlok as a Malay literature text for fifth-formers, or any others of that ilk, illustrates the “stable tension” theory that Shamsul posits. The theory holds that ethnic tensions will take place from time to time but they are manageable provided Malaysians take measures to ease them.

For Shamsul the first step towards becoming "mature” is to have a sound grasp of the issues in question. “We cannot make sense of the situation without deep and researched-based knowledge. We cannot survive on racial prejudices and communal stereotypes,” says Shamsul. Malaysians tend to view their “other” through racial prejudices, ethnic slurs and stereotypical images of the other’s behaviour.

How do you deal with disagreements among the different ethnic groups in Malaysia? “You are asking me a question about a disease that has not been adequately studied. We can only make an accurate diagnosis after a careful study of the malady. “Have we thought of the tools for finding solutions to the problem. We have to develop a plan to deal with this because it keeps returning.”

KITA is ideally placed to craft a framework for problem-solving. One of its projects in 2009 was the Monitoring Ethnic Relations System (MESRA for short) which acts as an early warning system for issues linked to ethnic relations in Malaysia.

The Australia-based Institute for Economics and Peace (IEP), which produces the annual Global Peace Index (GPI), is interested in the scheme. The two institutes will sign a memorandum of understanding soon to collaborate on endorsing a part of MESRA as a Country-based Peace Index to complement the GPI.

KITA also hopes to study Malaysia’s intellectual history besides finding out how “mundane activities” such as inter-racial and inter-ethnic marriages play their roles in fostering national unity.

It wants to do more and Shamsul is brimming with ideas. But KITA faces financial and manpower constraints. “We are only a small institute in UKM. If the government is really interested in resolving ethnic conflicts, it should elevate KITA to a national body.

“We have lots of ideas but we need dedicated people and generous funds to do our work. If we do not invest time and money in this, the psychosocial traumatic impact and the economic cost of worsening conditions are too awful to contemplate.”

A discussion on ethnic relations raises many important questions but there are no easy answers. In the case of the Interlok squabble, it has nothing to do with the novel, says Shamsul, who is a member of an independent panel to amend Abdullah's work. Instead, it has to do with the “dividedness” of Malaysia’s ethnic groups, as Shamsul puts it.

“We are not a homogeneous society. The Malays are one group of people but there are many types of Malays, and the same is true of the others.” Even among the Indian community there is no consensus on the choice of Interlok as a text for the literature part of the subject Bahasa Malaysia for fifth-formers. Some are against it while others are not.

Similarly, every Malaysian has his or her own vision of a national identity “based on a particular ideological framework” and the various attempts to construct this from the perspective of each public interest group represent “many nations-of-intent”.

The non-Malays prefer a definition that accords the “culture of each ethnic group in Malaysia a position equal to that of the Bumiputera,” writes Shamsul in his essay “Nations-of-Intent in Malaysia”. The suggestion that “Chinese language and rituals be an integral part of the national identity” is a case in point.

Interestingly, the tourism industry has managed to explain Malaysia’s ethnic and cultural diversity through traditional dances, folk songs and construction of ancestral villages, among others. And the main beneficiaries of this are the tourists.

“But this diversity has never been really captured research-wise,” says Shamsul, who recently examined a PhD thesis on the Indians in Malaysia. The postgraduate had assumed that the divisions within Malaysian society are straightforward and did not show any understanding of the “dividedness” that exists in each community.

“My comment was to rewrite the thesis. For a PhD candidate not to have recognised the diverse dissenting voices in each ethnic group does not augur well for the future of ethnic relations in Malaysia.”