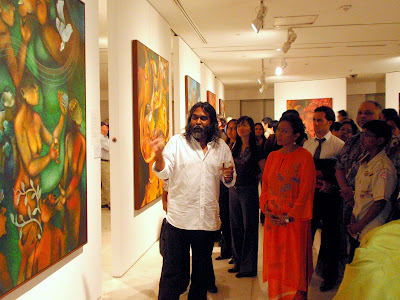 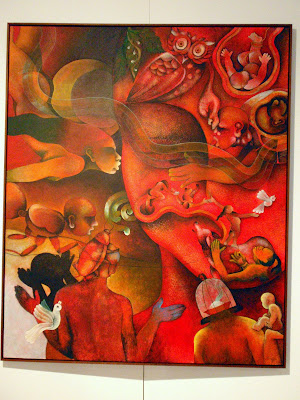 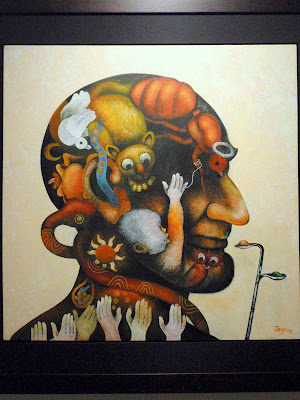 Malaysian artist Jeganathan Ramachandram will be exhibiting his paintings in Singapore if a deal with a company to display Human Watching: A Visual Poetry on the Science of Human Watching in the island republic is successful.
The intuitive artist told Survey that the move is still under negotiation.
Human watching made its debut at Galeri Petronas in March, 2009 and was well received by both art critics and art lovers.
Fourteen portraits representing females and males born on each of the seven days in a week were put on view.
The depictions (acrylic on canvas) were based on his observations of human behaviour for the past 14 years.
Images of seven females and seven males inform viewers through symbols of their strengths and weaknesses and their relationships with other people.
Those who have seen Human Watching identified with their profiles almost immediately.
Admit it: you are curious about yourself!
Males, who were born on Sunday (bottom picture), were pleasantly surprised to discover that Jeganathan (top picture) had read them correctly: they agreed that their families are very important to them and would do everything in their power to make their wives and children happy.
You would also perceive that they excel in public service.
Females, who were born on Monday (middle picture), are said to be keen observers of life and it would appear that the publishing industry was created for them.
Critics dismiss Jeganathan's work as "mumbo-jumbo": accusing him of being strongly influenced by astrology and numerology, among others.
What it all boils down to is little or no understanding of his take on human behaviour.
"My work is based purely on human watching -- there is a biological pattern which decides one's abilities," he told journalist Jehan Mohd (Learning Curve March 22, 2009).
He believes that his conclusions would help people understand themselves and their children better.
You would be surprised to learn that you could have been a great singer if only your talent had been discovered and nurtured when you were a child.
Please allow your imagination to roam freely.
The artist is currently working on a book based on his research and, hopefully, that will be a useful guide for parents.
"The book will help parents identify innate characteristics and abilities their children have from young and help them develop their offspring towards their full potential," he told Jehan.
"People CAN be what they want to be," he says.
NOTE: Survey will be talking to Jeganathan soon.
Photos: Jehan Mohd

Anonymous said…
I remember Jeganathan when he was with the NSTP as an artist. He has a skill and talent that will take him far. His art works displayed on this blog are fascinating to the eye. Not only can one not ignore them, but one is compelled to look closely at the breathtaking details. I wish Jega much success in his projects. It may not be long before he becomes a world-renowned personality.